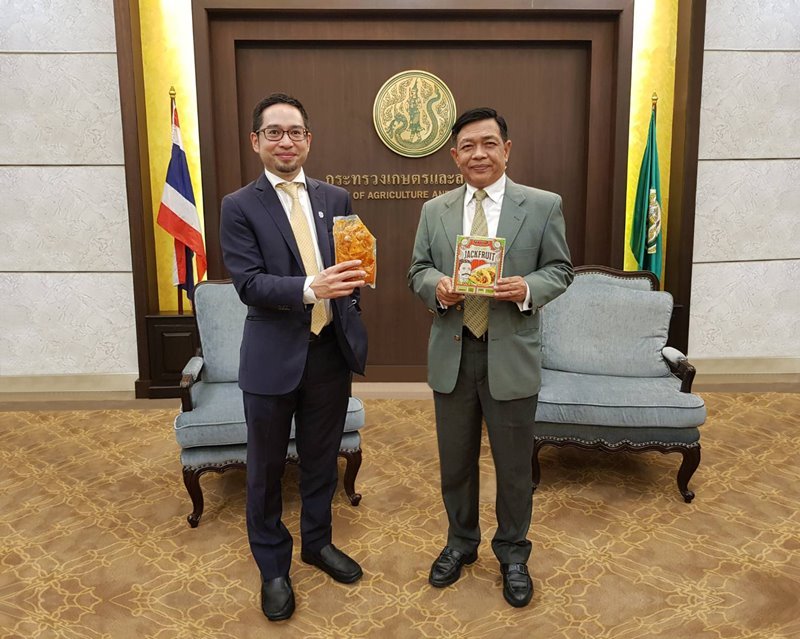 Dan Pathomvanich, Chief Executive Officer of NR Instant Produce Public Company Limited or NRF, a manufacture, supplier and distributor of food seasoning products, instant foods, ingredient, vegetarian meal which eggs and dairy products are excluded, plant-based food, ready-to-cook and ready-to-eat meals, instant beverage both in powdered and in bottle including non-food consumer products in consumer and environment friendly packaging (V-shapes) revealed that the company collaborated with Ministry of Agriculture together with The Federation of Thai Industries, Agro-Food Cluster, Office of Agricultural Economics, Agricultural Research Development Agency (Public Organization), Agritech and Innovation Center, National Food Institute, Ministry of Industry, Thai Chamber of Commerce and a group of private companies that produce food under the “Plant-based Meat” model join the roadmap from scratch to the end. Aiming to push Thailand to be a center of producing the future food or the world’s J-Hub and it can be called “Silicon Valley of Future Food”

The process is continuing a government’s policy that has already set new goals (First S-Curve, New S-Curve) to create opportunity and potential for Thailand. The Ministry of Agriculture has assigned the Office of Agricultural Economics to be responsible for the Future Crop Project to respond to the future food production to support a growing demand of the market. Therefore, future food is considered as a world’s mega-trend which is a food based on plant-based protein or plant-based meat.

As consumers see the advantage of plant based ingredients and pay more attention to healthy eating, many of the world’s largest companies move forward to expand their plant based product such as jackfruit, soybean, green peas, eggplant, mushroom, seaweed, etc., to proceed with various dishes such as Sushi, Hamburger, Sausage/ Fish ball or Pho. However, it is anticipated that there will be a new innovation that makes the plant-based food have a taste, a texture and a smell to be like the real meat in the same price or maybe it could be developed to be cheaper in order to reach more consumers.

Thailand is considered as the potential country to be the hub of producing plant-based food from scratch to the end to respond to the new eating trend in the New Normal era of consumers around the world, especially in China, India, Japan, ASEAN, USA and Europe which is the demand for healthy food are growing among 4 billion people.

The CEO of NRF said that the company is willing to support the government to get into the future food industry by operational expertise of NRF as a plant-based food producer from scratch to the end from the purchase of ingredients, support farmers products to help them and also support a new agricultural food business and food industries to get a various products for drive a growing demand of plant based food. NRF will invest in the construction of the factory to be a production based both domestic and international together with founding the Innovation Center to produce and deliver plant-based food all over the world.

“We believe that what we are doing is Transforming the world food market in the short run by building a demand and owning a standardized production base for plant based food, free from antibiotics, cholesterol which NRF's food production will help the world more sustainably. The company is committed to focusing on all the stakeholders, supporting farmers, creating opportunity and career to achieve greater sustainability in the system” -- said Dan.